The bow tie originated among Croatian mercenaries during the Prussian wars of the 17th century: the Croats used a scarf around the neck to hold together the opening of their shirts. This method was soon adopted (under the name Cravat, a name perhaps derived from the word Croat) by the upper classes in France (then a leading country in the field of fashion) and flourished in the 18th and 19th centuries. It is uncertain if the cravat then developed into the bow tie and necktie, or if the cravat gave rise to the bow tie, which in turn lead to the necktie. 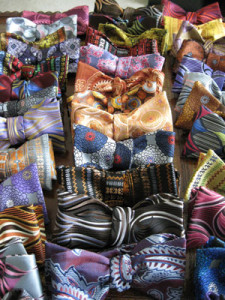 The predominate form is a diagonal curve when tied. When it comes to form, the sky is the limit.

The bow tie became synonymous with evening formal wear as the only proper compliment to a tuxedo. It is probably this association that created questions as to the bow tie use at other times and situations.

Black bow tie and tuxedo are now standard at high school proms and weddings. But bow ties have lost favor for business because they are complicated to tie and must be made in the correct collar size. This tendency towards conformity has guided most men’s choices for business attire. Although the bow tie is not synonymous with conformity, the bow tie has survived as a statement that man takes pride in his dress.